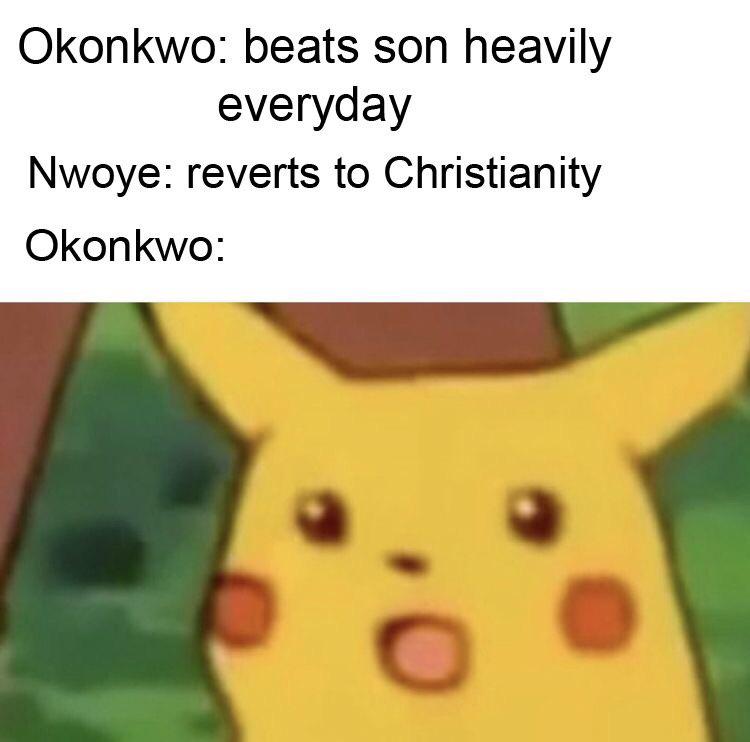 Do you want to grow up and be like your parents? Chances are that the majority of people will answer no to that question. I know that I don't want to be exactly like my parents. The character Nwoye in the book Things Fall Apart by Chinua Achebe is the main focus of this essay. His growth through the book and his ending transformation are the main discussion points.

From the beginning, we know that Okonkwo was terrified of being weak and a failure just like his father was. This fear caused him to worry that his children would end up being just as much of an abomination as his father was. Nwoye was barely even old enough to do the things that Okonkwo thought he should have accomplished, and in Okonkwo's eyes that meant Nwoye was lazy. The narrator describes Nwoye as Okonkwo's first son, Nwoye, was then twelve years old but was already causing his father great anxiety for his incipient laziness. At any rate, that was how it looked to his father, and he sought to correct him by constant nagging and beating. And so Nwoye was developing into a sad-faced youth. (Achebe 18). This quote shows that from an early age Nwoye was beaten and nagged for not living up to his father's very macho expectations. Thus, leading Nwoye to not only feel sad about his predicament, but also he would be pushed to feel like an outcast. Okonkwo thought that hitting and verbally abusing Nwoye Would make his son a man. However, this was only pushing Nwoye away and it wasn't making change his ways. This style of parenting from Okonkwo just made Nwoye fearful and resentful of Okonkwo.

One of the better times we see in Nwoye's life is the arrival of Ikemefuna. Ikemefuna didn't appear to have a very noticeable effect on Nwoye during the first part of his stay. With that said, we can clearly see that Ikemefuna had such a positive impact on Nwoye's life after he had been a part of their family for a while. In the book, we are told from the narrator that Okonkwo was inwardly pleased at his son's development, and he knew it was due to Ikemefuna. (Achebe 52). With this quote from the book Things Fall Apart, we can see quite vividly that if Okonkwo is pleased with the way that Nwoye was growing up, then Ikemefuna must have had a great impact on Nwoye. Not only is the impact that Ikemefuna had on Nwoye great but so was their inseparable bond. When Okonkwo came back from killing Ikemefuna, it is mentioned in the book that Nwoye instantly knew that Ikemefuna was dead. Nwoye had already been beaten for crying when he heard that Ikemefuna was leaving for his home and now his brother had died such an unjustifiable death. This event clearly shatters Nwoye and it breaks something deep inside him that is never truly fixed.

Since Nwoye had lost his friend, Ikemefuna, not only was his heart still torn, but he had another event trouble him. He had heard twins in the forest crying after they had been thrown away. He was very much troubled by this custom and no matter how hard he tried, he couldn’t find an answer that would appease his puzzled brain. There is a description from the book that really helps us visualize his thought process on why the things the white man was saing made sense to him. The description states, It was not the mad logic of the Trinity that captivated him. He did not understand it. It was the poetry of the new religion, something felt in the marrow. The hymn about brothers who sat in darkness and in fear seemed to answer a vague and persistent question that haunted his young soul–the question of the twins crying in the bush and the question of Ikemefuna who was killed. He felt a relief within as the hymn poured into his parched soul. The words of the hymn were like the drops of frozen rain melting on the dry palate of the panting earth (Achebe 136). With this description of Nwoye's thoughts on the Christians we can see a few things happening. The first thing is that the questions Nwoye could never answer about the death of Ikemefuna and the twins made him feel relieved from the religion that the white men spoke of. The second thing is that the new religion sounded poetic to Nwoye, and it seemed to melt his charred heart and comfort him in ways that no one else could. Nwoye had been tormented for a long time since the tragedies involving Ikemefuna and the twins. To him, he felt spiritually, emotionally, and mentally free with the new religion that was preached to him by the white men.

Above we saw the growth of Nwoye, as well as what his father, Okonkwo, thought about his growth. Now we will see how Nwoye turned out to be very similar to his father and even more like his grandfather. The describtion of Okonkwo's shameful death comes from the mouth of Obierka and he says, It is an abomination for a man to take his own life. It is an offense against the Earth, and a man who commits it will not be buried by his clansmen. His body is evil, and only strangers may touch it. That is why we ask your people to bring him down, because you are strangers. (Achebe 125). This quote shows that Okonkwo became an abomination. Now if we remember about Unoka, he was an abomination because he died of swelling which is an offense to the earth goddess. Okonkwo considered Nwoye an abomination when he joined the missionaries and bullied him for being lazy just so he could end up being an abomination himself. We see that there are three generations of abominations in Okonkwo's family. First, there is Unoka who was Okonkwo's dad. Then, there is of course Okonkwo, though he wasn't an abomination until he killed himself. Finally, Nwoye is the other abomination of the family. He was always berated for being lazy and then he was called an abomination by his father when he joined the missionaries.

No one ever wants to be like their parents or even be genetically close to their grandparents. Nwoye ended up becoming just like his father and grandfather. They were all considered abominations and they may even all be seen as weak. Now, from my personal perspective, I saw Nwoye as the first person in his family to be strong. He stood up for his rights, did things the way he belived they should be done, and he never lost sight in what was really important to him. The perspective of the village was that Nwoye was an abomination. So, in the end it was less about what Nwoye become and more about the perspective you viewed Nwoye from.